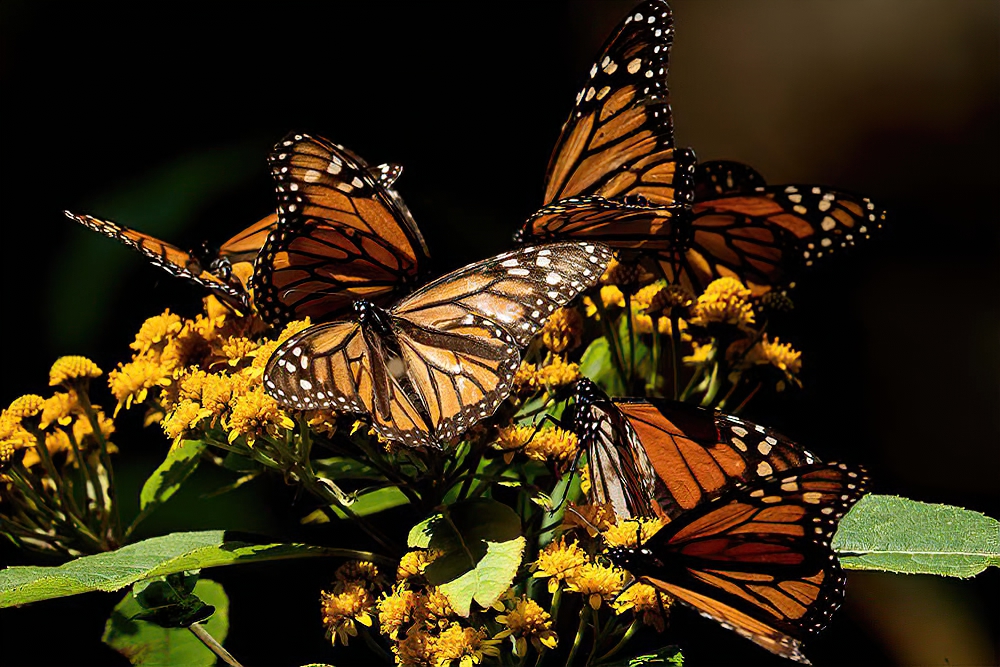 Last February I fulfilled a bucket-list item by visiting the wintering grounds of the Monarch Butterflies in the mountains west of Mexico City, Mexico. Just to ensure you understand, these Monarchs are the same orange and black butterflies that flitter around our yards here in the U. S.

The story of the Monarch life-cycle is one of the most interesting in all of the natural world. The butterflies we viewed in Mexico were hatched in the U.S. in the late Summer and arrived here beginning in November. While Steve and I were there, the researchers recovered tags from Monarchs who had flown all the way from Michigan and Pennsylvania; a journey of well over 2500 miles.

These same individuals, will over-winter here and journey north in March, surviving until they reach South Texas, where they will lay their eggs and die. There will be three subsequent generations of Monarchs living approximately six weeks each until the cycle begins again with the hatching that will live seven months. All of this from a “bug”.

Over the course of our trip, we visited the three main Monarch colonies; El Rosario, Sierra Chincua and Cerro Pelon. I’ve included a map below showing the relative location of the reserves in relation to Mexico City which is on the far right of the map.

We headquartered at the Don Gabino hotel in Angangueo which was certainly adequate but had the “hardest” beds on which I’ve ever slept. Wifi was spotty but the food was outstanding and they even let me in the kitchen to prove my point about improving red wine’s taste by beating it up in the blender.

The locals certainly capitalize on the tourist draw of the Monarch wintering grounds and that’s certainly the way it should be. If we can’t show a personal benefit to the local population for preserving critical habitat, conservation of that species doesn’t stand a chance. Once Steve and I arrived, there was no doubt we were in the right place. For the next two-three hundred yards, at Rosario especially, there was on vender after another hawking food, drink, crafts and butterfly paraphernalia.

As I stated earlier, this was one of the most physically demanding trips on which I’ve ever been. Once we got past the side walks and venders, the trail became very steep and rocky. It was very hard climbing and remember, we were above 10,000 feet altitude. I thought my lungs were going bust! We toughed it out the first day but from then on, we rented horses for the climb at a bargain price of 100 pesos; about $5 US. For another 100 pesos, the guide carried my pack and tripod. Lest you think I was exploiting third-world labor, I gave him 500 pesos; about $20.

This year was important: the Monarch butterfly population has been on a serious decline since 1996 but last year, conditions were good for milkweed – the only plant Monarchs lay their eggs on and the only food they eat as caterpillars. Temperatures throughout the season were “normal”, there were no major weather events and the Monarch population to soared by 144%.

When they arrived in Mexico last November, Monarch numbers exceeded 300 million. They covered 6.05 hectares – the highest in over a decade. While one good year does not create a trend, it is a step in the right direction and Steve and I really enjoyed them!

One thing that struck me as we stood in this midst of all of these Monarchs was that because the majority of Monarchs had come to El Rosario this year, I was witnessing not only the incredible numbers of live Monarchs but also the greatest mortality. The challenge of the migration and the struggle to survive was apparent.

Each winter is a dance for survival on a razors edge. Since Monarchs feed very little during this time, they must have enough fat reserves from the fall migration as well as water at the overwintering sites to carry them through the winter. They don’t always win this delicate balancing act and many are lost each year to starvation and bad weather.

After three days of climbing and photographing, we arrived back in Mexico early in afternoon and decided to check out the Aztec pyramids just outside of town.

After arriving back in town, we spent the evening in some very local dining establishments.

To track the Monarch migration this spring and fall, check out Journey North.  You can even enter your own sightings! https://journeynorth.org/monarchs

And, to learn more about Monarchs, the great migration and how you can help the population, check out Monarch Watch. https://www.monarchwatch.org/